Gyan Doensen of the Husqvarna SKS Racing NL team has won the final round of the ADAC 85 Cup in Furstlich Drehna. In both motos he took the lead in the beginning of the race and managed to win the first and second moto!

Gyan was feeling himself at home in the free and time practice session. With a good rhythm he posted a few fast lap times on the clock and took pole position.

The rider from Swalmen took a good start in the opening moto and took almost the holeshot. In the second corner he took over the lead and started to pull away from the rest of the field. Gyan made no mistakes and was in control. After a well ridden race he took the win in the first moto.

In the second moto he took a good start as well and came out of the first turn in second position. He had a good rhythm and in two laps time he took over the lead. Gyan was riding a high pace and made a gap over himself and the rest of the field. Gyan kept his head cool till the checkered flag and managed to win the second moto as well.

With a double moto win he took the overall win in Furstlich Drehna. Despite the fact that he had missed five motos, he still finished in third position in the final championship standings. 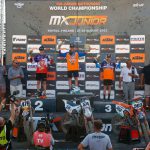