Gyan Doensen of the Husqvarna SKS Racing NL team came close to a podium finish at the second round of the EMX85 Series at Lommel in Belgium. In both motos he had to come back through the field and finished third and eighth in the motos, which gave him fourth overall.

Gyan couldn’t find his rhythm in the free practice and time practice session. In time practice he set the fifth fastest time and was ready to go in the qualifying heat. He took the holeshot but due to a mistake in the opening lap he dropped back to second position. For the rest of the race he had an interesting battle with Jarne Bervoets and finished in a strong second place.

In both motos on Sunday he had a setback in the beginning. In the opening moto he had to avoid a fallen rider at the start and had to come back from around thirtieth position. During the first lap he worked himself up into twelfth position and in the laps after he managed to pass more riders. He worked his way up into fourth position and at the final jump he took over third place and scored important points for the championship.

In the second moto he took a better start and came out of the first turn in seventh position. Unfortunately things went wrong again during the first lap because he crashed with three other riders and dropped all the way back to last position. He started a charge through the field and fought his way up into seventh position. In the final lap he gave everything to take over fifth position but unfortunately he made a small crash and finally finished the race in eighth position.

With a 3-8 moto score he finished tied in points for third but was classified in fourth position. In two weeks time the series continues in Emmercompascuum.

The team will now travel to Maggiora in Italy for round three of the EMX250 Series! 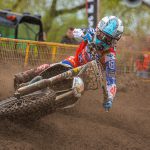 Scott Smulders fourth in Gemert and second in MarumUncategorized 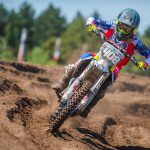