Cas Valk and Kay Karssemakers of the Husqvarna SKS Racing NL team finished sixth and seventh respectively during the penultimate round of the EMX125 European championship series at Arco di Trento in Italy.

Cas had the better start of the two riders in the first race, and was in an early fourth position. He quickly advanced to third, and had a good rhythm going. He held third for a long time, and eventually finished fourth. Kay had to come from further down, joining the fray in 15th spot initially. He got all the way up to fifth, but lost his flow in trying to move past another rider, and eventually finished seventh.

Kay had a better start in the second race, getting going in sixth position. He moved up to fourth, and launched an attach to get into third. His rear wheel slid out, and this allowed three riders to pass him. He kept it steady from then on, and finished seventh. Cas had a lesser start, and he had to pass many riders initially. This sapped his energy, and his recent throat infection kept him less than optimally fit. He had to slack off a bit, and finished ninth.

Cas was sixth overall, just one position ahead of Kay. Kay is third in the championship standings, and Cas has moved up to 18th. The series will complete at Mantova on 9 November. 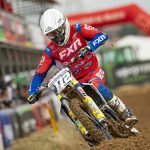 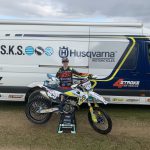