The Husqvarna SKS Racing NL team can look back upon a successful weekend. Kay Karssemakers finished third in the 125 junior world championships in Greece, and Lynn Valk claimed her first WMX Grand Prix race win in Lommel, which likewise netted her third overall.

Under blazing hot conditions, Karssemakers qualified second in Greece on Saturday. He translated that into a good start in the opening race. “I was elated that I got a good start, and followed race leader Osterhagen closely,” he said. “A silly mistake on the second lap caused me to slip out, and I had to recover from 14th place.  I came back to sixth, but crashed again. I again moved up from tenth to seventh, but of course I expected more.”

Kay was motivated for race two, and again got a good start. After two corners, he moved into third, and put the pressure on the two leaders. “Together we had a good pace, and I passed the second rider. My times were good, and I could close in on the leader. I rode wheel to wheel with him for five laps, but then a mistake cost me some time. The rider behind me used the opportunity to pass me. The race was red-flagged early, and I was classified third.”

Kay finished third overall in the junior world championships, and will now concentrate on the rest of his EMX125 campaign.

Lynn Valk was in sterling form during the second round of the WMX world championships at Lommel in Belgium. After qualifying well, she went into a tussle for the lead on the extremely heavy track in race one. At mid-race distance, she took over the lead, and kept her head despite severe pressure from the rider behind her.  She crossed the line in first place, her debut world championship victory.

Valk still had some discomfort form the arm that she had injured at Loket in the Czech Republic the previous week. She rode a steady race to finish sixth, which netted her third overall.  She is also currently third in the world championship standings.

The series continues on 4 September in Turkey. 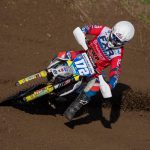 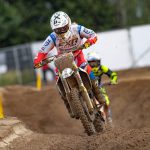 Victory For Lynn Valk At EMX Ladies in FranceEMX Ladies