Lynn Valk of the Husqvarna SKS Racing NL team scored her first top three GP finish of the season at last weekend’s round in Loket. Valk finished third in t e first race, but a bad start kept her down to ninth in the second heat.

The track at Loket is one of the most technically-challenging to face riders during the season, with elevation changes, off-camber corners and a slippery surface. Lynn posted the fourth fastest time during free training, but crashed hard towards the end of the session. The bike was so damaged, taht they decided to use the spare bike for qualifying. “We did not have enough time to fix the bike before qualifying, so I used the spare bike, and still qualified sixth,” she said.

Lynn got a good start in the first race, and after a consistent ride, she crossed the line in third position. The second race was a bit more troublesome. “My start was not as good, and I had some trouble gaining positions, because my body was not fully recovered yet, which kept me down to ninth spot.”

Lynn was sixth overall. The WMX series continues next Saturday at Lommel in Belgium. 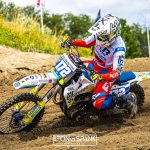 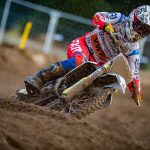