The Husqvarna SKS Racing NL team enjoyed success and setback in equal measure during the opening round of the EMX125 motocross European Championships at Matterley Basin in Great Britain. Kay Karssemakers was sixth overall and Cas Valk was forced to the side after a crash in race 1.

The team was ready for the action to begin after a thorough preparation period. The track was perfectly prepared and quite fast for the first training sessions. Kay claimed the ninth gate, just one spot ahead of teammate Cas.

Karssemakers launched just inside the top ten in race one. He held his own in ninth for a few laps, and moved up to seventh after passing two riders in one maneuvre. He held this all the way to the flag, and opened his European championship account with a good haul of points.

Valk was busy with a march through the field after a mediocre start. He advanced form outside the top 20 to 16th, but alas crashed heavily after a collision with another rider. He was forced to retire for the rest of the day.

Karssemakers was one of the riders providing real spice to proceedings in race two. He was in a constant battle for a top three finish. He was involved in a spectacular incident leading to a sickening crash after he and another rider collided mid-air. The other rider was knocked out, which led to the red-flagging of the race. Kay was classified as fourth, taking the position of the lap before, and this earned him sixth overall for the day.

The next round of the European championship series will take place at Maggiora in Italy next weekend.

On the track of Esanatoglia in Italy was the second round of the Women European Championship. Lynn Valk managed to win both motos and is leading the championship after two rounds. So far Valk has won all four motos in the championship! 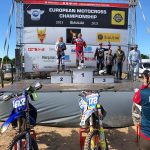 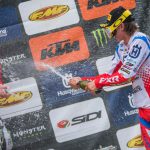