Boyd van der Voor and Danny van den Bosse of the Husqvarna SKS Racing NL team had good speed on display at the penultimate round of the Open Dutch Championships at Oss.  Both riders were plagues by mediocre starts and crashes, keeping them from the results they might have achieved.

Boyd posted the 11th qualifying time in the 250 class, which gave him confidence for the race, but setback struck early,  “I launched badly off the start, and crashed in the fight for positions. I restarted last, and still managed 14th,” Boyd said.

Boyd again had to fight a forward battle in race two. This time he managed to get to 12, which was also his overall result.  “My riding went well, just a pity that I had to fight my way from the back each time,” he said.

Danny was in sharp form in the 125 class, posting the sixth-fastest qualifying time. He joined the fray in 14th position in race one after a mediocre start, but managed to get to eighth.  The second race started off better for him, where he was in the top ten right off the gate,  “I crashed in the second lap, and  my bike was damaged. I came from 28th to 23rd. The riding as such was good, but it was a pity that I crashed,” he said.

The final round of the Open Dutch Championships wil be held at Westerbork on 11 October. 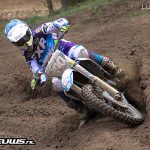 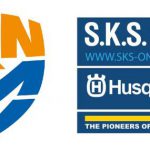