Miro Sihvonen of the Husqvarna SKS Racing NL team scored a top three placement at the first round of the EMX Open Class European championship series at the Latvian GP. Sihvonen was third in the second heat, after finishing fifth in the opening race. He did however incur a time penalty which dropped him to tenth.

Miro was strong during qualifying, claiming the sixth gate. He launched well into the first race, and held a steady pace throughout to finish fifth. A time penalty dropped him five places, though, and he was eventually classified as tenth. He left no doubt in the second race, though, where he rode strongly to finish third.

“I made another step in the right direction,” Miro said, “I still battle to maintain a high tempo for a full race distance, but that is normal I guess for how long we have been out of racing. I have only managed to ride half a season throughout the last three years due to all the injuries.”

Miro will participate in the second round of the series this coming Tuesday, again at Kegums. 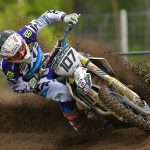 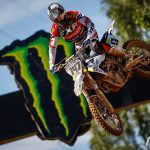