Lars van Berkel of the Husqvarna SKS Racing NL team claimed the Open Dutch Championship 500cc Title in St. Isidorushoeve.  Van Berkel won both heats in another dominating performance.  Danny van den Bosse rode to victory in the first 85cc heat, making the day near perfect for the team with his second overall.

Lars battled somewhat during qualifying, but was ready for business as the gates dropped for the first race. He was in the leading group, and when the race leader had a bobble, he struck and moved to the front. He experienced some pressure from the second placed rider, but pushed through, and claimed the flag.

Van Berkel was determined to celebrate his title in style by claiming two race wins. In the second heat, he again slotted in a menacing second position. After taking a few laps  to gain his rhythm, he struck again, and made his day complete with another race win.

Danny van den Bosse rode out of his skin in the first 85cc heat.  He was part of the leading group of five, and after biding his time, he moved into the lead at mid-race distance. He fended off several attacks from class champion, Cas Valk, but held the lead until the flag fell.

The second race started in more of a minor key,  and Danny was only eighth when they passed the scorers.  He advanced, but unfortunately tangled with another rider in fifth position and fell,  The bikes were locked together, and it took a while for him to get going again. Resuming from 12th position, but gave it his all to finish eighth.  This rewarded him with second overall for the day.

The team will be in action at the annual beach race in Vlissingen next Sunday. 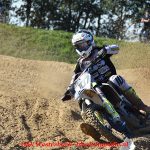 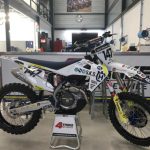